In partnership with Château Latour and with the exceptional presence of starred chef Jean Baptiste Natali.

From Lisbon to Bordeaux, PONANT invites you to join an exceptional gastronomical and oenological cruise in partnership with Château Latour along the Portuguese, Spanish and French coasts. Get a different perspective on the Atlantic Ocean coastline during this 11-day trip aboard L’Austral.

Setting sail from Lisbon, the the seven-hilled Portuguese capital of seven hills, you will chart a course for the port of Leixões, tfrom where you will reach the city of Porto. Capital of the northern region of Portugal, this ‘city of granite, the centre of which is a UNESCO World Heritage site, is renowned for its wine.

Your journey will continue to Galicia and the city of Vigo, the biggest fishing port in Spain. Not far from there, Santiago de Compostela awaits you. This unmissable pilgrimage destination is home to a number of monuments from the Romanesque, Gothic and Baroque periods, testimony to its illustrious past.

L’Austral will head for the capital of the Spanish Basque Country, Bilbao. Between daring architecture and the continuation of its ancestral traditions, you will be able to enjoy the city’s unique energy.

You will conclude your exploration of Basque Country on the French side with a stay in the city of Saint-Jean-de-Luz before reaching the beautiful fortified city of Talmont-sur-Gironde.

During your last call in Pauillac, you will have the opportunity to make several visits and wine tastings at some very beautiful wine estates in the Saint-Estephe, Margaux, and Pauillac appellations.

Your cruise will end in Bordeaux, the wine capital of the world! 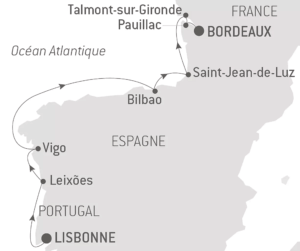 For your serenity, PONANT "all inclusive" includes :